Company Growth: From Struggling to Cash Flow Positive in 1.5 Years 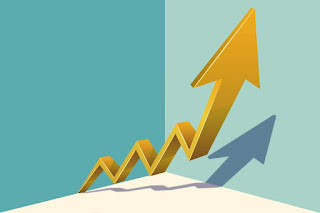 One of my company moved from 'struggling' to 'cash flow positive' by banning FRs (Feature Requests) during pre-sales cycle. The ban pulled the company out of the vicious circle and allowed to grow.

Back then, start to launch took ~2 years. When the company was launched, feedback from the field was that the product had good features for the problem it was solving. Some enterprise readiness features were suggested before the launch.

As sales team came on-board, we started hearing that some features - critical for sale - are missing. The team decided to support sales and started working on the FRs. I remember getting call almost everyday around 8 PM India time i.e. 7.30 AM pacific and sometimes 2.30 AM IST.

Then came a milestone decision of banning the FRs from pre-sales. Some felt comfortable & were told "if everything that customer needs is in the product, salesperson is not needed." New sales team was strongly told to just sell whatever is on the truck - No future selling.

It is sounding very simple and logical now when I am writing it. It was never simple to understand & implement all that - a lot ups and downs happened. But results were great: - Product became much better, stable, usable - Company gone cash flow positive w/o reducing head count

Couple more things: 1. There is a difference between listening to market feedback and implementing customer asks. 2. Justifying FRs by saying "The item was anyway in the plan - the FR is just accelerating it" is mostly a fallacy. I have never seen it working.

Extending the thread as some people asked to put details of how life of different teams changed after putting ban on FRs by pre-sales team. Any change brings some initial disturbances. But everyone was happier after the change settled down.
Sales team had to put more effort for building the pipeline. One can't just put a lead based on relationship. A lead qualification criterion is added - "Does existing product solve customer's pain?" For this, "Relationship Builder" sales people were replaced with "Challengers".
The sales cycles became shorter and predicable. Everything was standard. No dependency on Engg team No chasing for features No frustration due to communication gaps or missed timelines etc. Simplified implementation and support.
Sales people were much more confidant because all the selling material was available and they have rehearsed it well. PoCs were simple & fast. SEs were confidant about the features. This brought rapid growth in revenue.
The new Product Management leader suggested not to complete some of the features until there is a taker for it in the market. Such features were dropped after some time during the re-architecting exercise.
Engg team not just got relieved from changing priorities but also didn't had to spend time on support. No more night calls. Time was spent building strategic features & clearing tech debt. This made the quality of product much better and further enhanced confidence of sellers.
A very senior & deep knowledgeable yet down-to-earth architect was brought to take product to the next level. It took a few years - Re-Architecture was done shipping sale-able features, backward compatibility and moving product from appliance-based to SaaS-ready.
Overall it was win-win for everyone. Everything became better: - Quality of product - Customer satisfaction - Quality of life of all teams members - Profitability of the company
Posted by Akshay Mathur No comments: 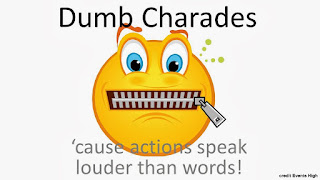 Many years back I came to Pune and started staying in a housing complex called Nisarg City. As my son started going to play school, we started meeting other parents during the pick and drop duty. Slowly parents also became fast friends - especially who were living in same or nearby housing complexes.

At some point, 4 of us used to walk together - rain or shine.

Can you guess the topic of discussion during most morning walks?

No, it was never politics. Mostly it was about solving a technical/programming problem. Else we used to plan a family trip together.

In the evening - especially on weekends, families used to sit together till late - chit-chatting and enjoying. One of the family was a lot into playing Dumb Charades and slowly dragged all of us into it.

It has been about 6 years since I moved to Bangalore. Whatsapp came and we got connected again. But unfortunately never got a chance sitting together.

But, I still remember and cherish those days. Nothing matches roaming, eating and playing together. During those days, we played Dumb Charades so many times that finding a movie name (that was not already played many times) started becoming a challenge. Sometimes, we used to go to Wikipedia in search for movie names.

Earlier this year - just before Covid era - we settled in the new housing complex in Bangalore (after 5 year long stay in the individual house) and lockdown happened.

Diwali of 2020 brought back both - Dumb Charades as well as family get-togethers - back in our life.

In memory of the old days and with the anticipation of nice time forward, I thought of creating a simple application that randomly brings a movie name (and other available context) from Wikipedia to help play Dumb Charades.

First version was a Python script - quick and dirty. However, Product Manager in me insisted for much better user experience. This resulted in creation of a web application that can also be used from anywhere using mobile phone.

Enjoy the app at http://mathurakshay.github.io/dumbc.html

PS: If you are interested in the technical aspect of the app, please look at https://github.com/mathurakshay/mathurakshay.github.io.

Posted by Akshay Mathur No comments:

Kubernetes as Orchestrator for A10 Lightning Controller

A10 Lightning Controller is an application composed of multiple micro-services and works as the management, control and analytics plane of A10 Lightning Application Delivery Service. 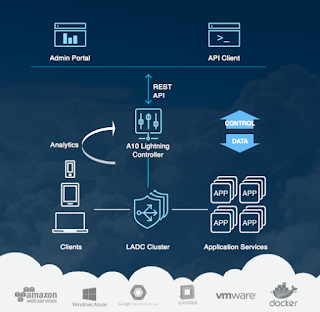 By default the controller is available to A10 customers as SaaS and they need to deploy only Lightning ADCs in their network.

But, some customers want to deploy controller also in their network for compliance or other (mostly non-technical) reasons.

Bangalore Kubernetes Meetup group thought of doing a session with topic Kubernetes in production and gave us (Manu and Myself) a chance to present. Our use case was that not just all the components of A10 Lightning controller run in Kubernetes (aka K8s) but we also package it so that our customer's production also run in K8s. So, this includes packaging and distribution of application as well as running in the scenario when the administrator of the application may not be very K8s savvy.

Following is what we covered in our talk:

Here is the presentation:

Kubernetes as Orchestrator for A10 Lightning Controller from Akshay Mathur

At the end I thank Manu for co-presenting: 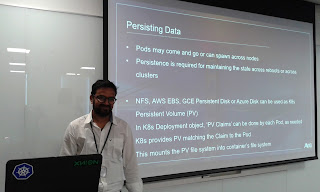 Posted by Akshay Mathur No comments:

Think of a scenario in which an e-commerce application is running in a data center and suddenly a few items became popular and a lot of users start checking them.  Suddenly traffic starts building on the website and response starts becoming slower because of the load on servers. The only solution now is to scale the server infrastructure by provisioning more servers to handle the traffic. But provisioning new server on-the-fly is not an option in data center. Public clouds come as savor. The additional server can be launched in a public cloud like AWS and additional traffic can be routed to that server.

So, the Cloud bursting relates to hybrid clouds. The advantage of such a hybrid cloud deployment is that the resources become available on-the-fly and an organization only pays for extra compute resources when they are needed.

The cloud bursting architecture establishes a form of dynamic scaling that scales or “bursts out” on-premise IT resources into a cloud whenever predefined capacity thresholds have been reached. The corresponding cloud-based IT resources are redundantly pre-deployed but remain inactive until cloud bursting occurs. After they are no longer required, the cloud-based IT resources are released and the architecture “bursts in” back to the on-premise environment.

The foundation of this architectural model is based on the automated scaling listener and resource replication mechanisms. The automated scaling listener first determines when to trigger resource replication for deploying the server in cloud.  Next, when the additional resources i.e. servers are ready in cloud, it redirects requests to those servers along with the on-premises servers. 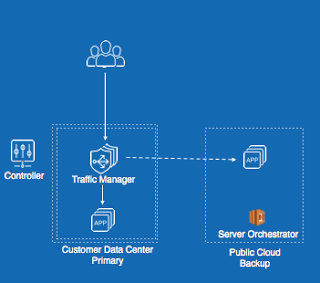 In steady state, A10 Lightning ADS will front-end the application traffic and will monitor for server latency. An application server instance is expected in the AWS account in stopped state so that it can be started by the lambda function as needed.


Cloud Bursting with A10 Lightning ADS from Akshay Mathur